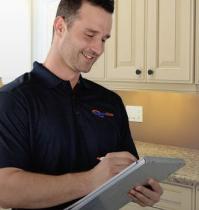 AdvantaClean was founded in 1994 in Winter Park, Florida as a contracting business specializing in emergency loss mitigation services and structural repairs to homes and buildings.

The original partners created the company after gaining a wealth of knowledge and experience responding to Hurricane Andrew, which ravaged South Florida in August of 1992.

In May of 1995, the company opened a second office in Charlotte, North Carolina. The business grew quickly, and in three short years, AdvantaClean was ranked by Entrepreneur Magazine as the 33rd fastest growing small business in America.

The AdvantaClean franchise program was initiated in 2000, and the company’s existing locations were enrolled as company stores. Over the next six years, investments were made in technology and infrastructure, setting up the framework necessary to manage and support a successful, national franchise network.

Then, in 2006, the first of the company stores were sold to others under the AdvantaClean franchise model.